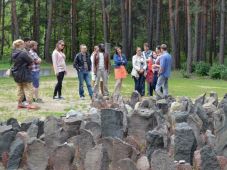 The course again proved to be very successful and was attended by students from different European countries.

Among the teaching staff participating in the program were a number of high-profile international and Finnish experts. Two of them, Cecilie Felicia Stokholm Banke of the Danish Institute for International Studies and Wichert ten Have of the Amsterdam Centre for Holocaust and Genocide Studies, are also involved in the Academic Working Group of the ITF. The course also had two lecturers from Mémorial de la Shoah in Paris, Philippe Boukara and Johann Chapoutot.  Among the Finnish experts, professor of forensic science Helena Ranta gave a lecture on her work in Kosovo and most recent experience in Libya.

The course program was built around the concept of giving the students, both under- and postgraduates with differing backgrounds and previous knowledge of the subject, a thorough understanding of the field. The Holocaust serves as the focal point from which to further explore the dimensions of genocides as historical, legal, political and educational problems. The course schedule this year included a two-day visit to Riga, Latvia, and two of the Holocaust-related sites in or close to the city: the former site of the Riga Ghetto and the memorial at the killing site of Rumbula. The group had the pleasure of working with Danute Dūra, a historian from the Latvian Museum of Occupation.

The course, first of its kind in Finland, has become all-important for developing Holocaust and Genocide Studies into a full-fledged scholarly field in Finland. The participants of the courses in 2011 and 2012 form an expanding international network of young and talented scholars. The organizers wish to further develop the course program into a leading learning experience of its kind in Europe. The preparations for a new Helsinki Summer School course for 2013 are already underway!