A member state of the IHRA since 2007, Estonia is committed to the principles of the Stockholm Declaration. Teaching and learning about the Holocaust is part of the national curriculum. The importance of remembrance of the Holocaust is well acknowledged by Estonian politicians, with the annual commemoration ceremony on the international Holocaust Memorial Day, January 27, being a natural part of their agenda. Around this date, commemoration events are organised by museums and other institutions. Markers have been put in place at most killing sites as well as at the graves of victims; some sites, however, still need to be further researched and marked. Four sites related to the Holocaust are protected as national monuments. In 2013, an open-air exhibition at the former concentration camp in Klooga was inaugurated. The main comprehensive research on the Holocaust on the territory of Estonia was accomplished in 1999–2006 and the results were published in a compendium titled “Estonia 1940–1945. Reports of the Estonian International Commission for the Investigation of Crimes against Humanity, Tallinn 2006. http://www.mnemosyne.ee/hc.ee/index_frameset.htm)

Around 4300 Jews lived in Estonia in the 1930s, and enjoyed the cultural autonomy established by law in 1926. With the Soviet occupation of Estonia in 1940, Jewish cultural autonomy, in addition to the activities of Jewish organizations, was terminated. Four hundred and fourteen Estonian Jews (10 percent of the Jewish community) were deported to Siberia in the course of the mass deportations of June 1941. During the German occupation (1941-1944), approximately 1,000 Jews were murdered. In addition, approximately 13,000 Jews from other parts of Europe were transported to Nazi camps in Estonia, where most of them perished. Currently, the Jewish community in Estonia consists of about 2,000 people.

In the current national curriculum (adopted in 2011) the contemporary history course is built up of thematic blocks, the Holocaust being part of the topics of World War II and totalitarian regimes in the recent history thematic block. The Holocaust and crimes against humanity also relate to the key competencies and cross-curricular topics related to values, ethics and cultural awareness, as well as social and civic competencies. Key competencies and cross-curricular topics form the core of the general part of the national curriculum and need to be developed throughout all the subjects and extra-curricular activities. This applies both to secondary and upper-secondary levels. The topic of the Holocaust and crimes against humanity is connected to the horizontal topics of human rights, values and morals which are integrated throughout the whole study process at all levels of education. However, the Holocaust is explicitly addressed in the history syllabus of the 9th grade under the topic of II WW; the upper secondary school syllabi of the history of the recent era include a separate topic (besides WW II bloc) on crimes against humanity. It was introduced in the new curriculum in 2011 to encourage a wider and more in-depth approach to this topic. New and revised relevant textbooks including the topic of the Holocaust are published regularly.

A teachers’ handbook on teaching about the Holocaust and extensive study materials were prepared during Estonia’s liaison period with the IHRA and are available both in Estonian and Russian languages. Although published in 2007, they can in no way be considered outdated and are in active use. The thorough handbook includes guidelines on how to teach about the Holocaust; there are explanations of terminology, a chronology, background and topical information on antisemitism, crimes against humanity, Jewish life and culture in Europe, memories about Jewish life in Estonia and concentration camps during WWII in Europe and Estonia. It also contains tasks for students, PowerPoint presentations, maps, pictures and films (on DVD) with subtitles in Estonian and Russian.  Despite the universal nature of the topic, Estonian educators deem it essential to place the history of the Holocaust into the local and, at the same time, global contexts. 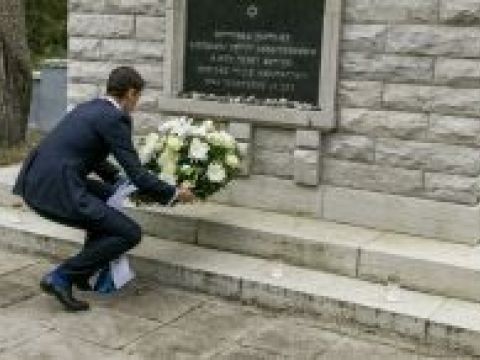 In recent years, awareness about the Holocaust has increased considerably. It is in great part thanks to the creation of a state of the art exposition by the Estonian History Museum: an open-air exhibition on the killing site of the former concentration camp in Klooga in 2013. In addition, during the last decade, plaques and memorial stones have been installed in various other places connected to the Holocaust, most recently in 2014 at a former Lasnamäe airfield in Tallinn.

Notwithstanding the fact that there is no special Holocaust museum in Estonia, the subject of the Holocaust is more and more represented in various museums: in the Estonian History Museum, in the Museum of Occupations, etc. In 2006 an Estonian Jewish Museum was founded initially as a website (see: http://eja.pri.ee/), and in 2008 as an exposition at the Jewish Community Centre in Tallinn, too. The Museum has many materials on the Holocaust in Estonia. Next to the exposition, in January 2012, the Jewish Community founded a Gallery of Memory where the names of nearly a thousand Estonian Jews who perished in the Holocaust are perpetuated.

In Estonia, 27th January has been the Day of Remembrance of the victims of the Holocaust since 2002. Starting from 2012, by the decision of the State Chancellery, the responsibility of arranging and coordinating this day’s national commemoration event is with the Ministry of Education and Research in cooperation with the local Jewish Community. The event has taken place either in Klooga, at the synagogue, or at the Jewish cemetery in Tallinn, Rahumäe. The annual commemoration event is widely covered by the national media, radio and TV, with an overview in the main news programme. Newspapers publish opinion articles and interviews with researchers and opinion leaders. As a result, we may state that in the course of the last 15 years, but most noticeably in the recent years, the topic of the Holocaust and the importance of Holocaust commemoration have growingly taken its place in the awareness of the population.

Around the Holocaust commemoration day of January 27, the Ministry of Education and Research, along with non-governmental partners has organised seminars and conferences for educators, teachers of history and civics since 2012. These seminars are open to the wider audience, the goal being to bring the topic more to the centre of the public discourse and create links with societal changes, including new forms of racism, xenophobia and intolerance.

Members of the Estonian Jewish Community and guests annually commemorate the date of the massacre at the Klooga concentration camp on September 19, 1944. In 2014, to mark the 70th anniversary of this mass murder, the Estonian delegation to the IHRA took an initiative to organise a more encompassing commemorative event. The Prime Minister, other politicians and public figures as well as the diplomatic corps took part in the ceremony, which was framed with music and rabbinical prayers. A similar gathering, with the participation of the President of the Estonian Parliament, took place at the initiative of the Estonian delegation to IHRA in 2017.

The first memorial to commemorate the Jews exterminated in Estonia in 1941-1944 was unveiled in 1994 at Klooga, on the territory of a former Nazi concentration camp; the Soviet-period burial monument at the Klooga site was renovated, and since 2013, an open-air exhibition complements the monuments with information about the Holocaust on the territory of Estonia.  The Estonian Ministry of Culture, with the participation of the Estonian Jewish Community and the United States Commission for the Preservation of America's Heritage Abroad have accomplished a project "Holocaust Markers in Estonia". By now, all of the major and physically accessible sites have been marked within the framework of this project. In 2005, Holocaust remembrance markers were established at Klooga in Harju County and at Ereda, Kiviõli, Kuremäe and Vaivara in East Viru County; in 2009 at the former sites of camps in Soska, Kohtla-Nõmme and Aseri and at the Pärnu cemetery, in memory of the children killed at the Pärnu synagogue in 1941. 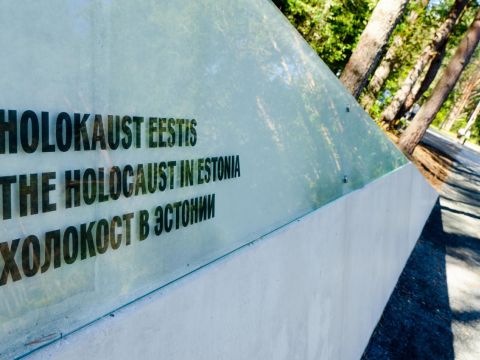 The first comprehensive research on the Holocaust on the territory of Estonia was accomplished in 1999–2006 under the aegis of the International Commission for the Investigation of Crimes against Humanity and the results were published in a compendium titled “Estonia 1940–1945. Reports of the Estonian International Commission for the Investigation of Crimes against Humanity, Tallinn 2006. http://www.mnemosyne.ee/hc.ee/index_frameset.htm). The events related to the Holocaust were researched and described in detail, and the compendium has served as a basis for further research both in Estonia as well as in other countries. Many specialised authors have cited it.  In recent years, two important exhibitions were created by the Estonian History Museum, based on research by local experts and foreign consultants; social and political scientists as well as researchers in the field of historical memory and remembrance also use results of Holocaust research. Extensive study materials for schools, centring on the connections of the Holocaust and Estonia, were prepared by our researchers in 2007 and, being available both electronically and on paper, are in active use since then.