IHRA’s project on killing sites is dedicated to research, commemoration and preservation of places where mass shootings took place. The project aims to raise awareness of this centrally important aspect of the Holocaust and to facilitate bringing together the organizations and individuals dealing with the subject. 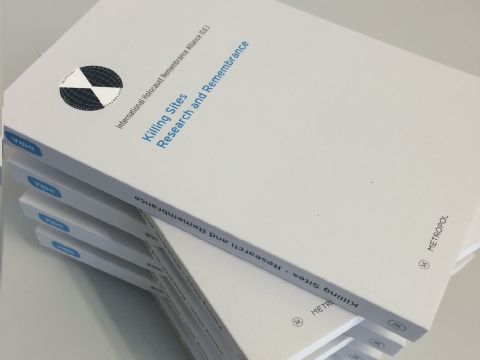 IHRA’s conference on “Killing Sites - Research and Remembrance”, hosted by the Pedagogical University of Krakow, took place in Krakow, Poland from 22-23 January 2014. The full report can be read here. The conference was attended by a variety of experts in the field and focused on fieldwork as well as exploring regional perspectives, databases, education and commemoration. Former IHRA Chairs, Dr. Mario Silva (Canada) and Sir Andrew Burns (United Kingdom) addressed the participants, and Advisor to the IHRA Steven Katz moderated one of the program’s sessions. An article on the conference published in the New York Times can be read here.

Click on one of the images to view the gallery (31 images).

The in-depth knowledge presented at the conference served as the basis for the comprehensive report prepared by the project’s Steering Committee and presented at the May 2014 IHRA Plenary in London.  The report names global and regional actors in the field, summarizes past endeavors, and analyzes recent approaches to provide an overview of the subject.

In March 2015, IHRA published its first book in a series, incorporating the conference papers into the first relatively comprehensive and up-to-date anthology that reflects both research and fieldwork on killing sites.

The publication was presented at the handover ceremony on 9 March at the Hungarian Embassy. The full version of the publication can be downloaded free of charge on the IHRA website.

Remembrance of the Holocaust often focuses on those who have suffered and perished in concentration camps, ghettos or on death marches.  But the killing sites, places where mass shootings took place, are still relatively unknown.  Popular and official political commemorations, as well as much scholarly research, have tended to focus on the extermination camps, the gas chambers, and the ghettos.  The field of research on killing sites, however, was neglected for a long time and is in desperate need of further attention. The victims of these mass murders were predominantly Jewish and often lived nearby. Communities that existed and thrived for centuries perished in a few hours, hastily buried in unmarked graves and pits. Mass shootings were a distinctive feature of the genocidal and occupation policies of the Nazis in the eastern parts of Europe, but they were not restricted to Eastern European soil, although the majority of large-scale killing sites were set up there.

The victims were killed by a variety of mobile and stationary killing units. It is estimated that 25 to 30 percent of the victims of the Holocaust were murdered by mass shooting. The vast majority of these killing sites were deliberately left unmarked by the perpetrators and many have yet to be located. Various institutions and initiatives have begun in recent years to research and mark the sites. Due to the often vast dimensions of mass graves and huge numbers of killing sites that are still undiscovered or no longer locatable, these attempts can only form the basis for current and future activities. They emphasize the need for further research and reveal the present lack of scholarly work combined with transnational approaches which should be stimulated. Yet international cooperation and networking on a broader scale is virtually non-existent.

IHRA’s MYWP project on killing sites aims to offer insight on different approaches to explore study and preserve the killing sites.  It will raise public awareness, serve as a neutral platform for networking, offer support and expertise to local initiatives, and encourage further research.

The report assesses the main challenges and obstacles in regard to the preservation of historic sites of this nature, and provides an overview of the political and historical background of the field and the research yet to be made on the international and national/local levels.