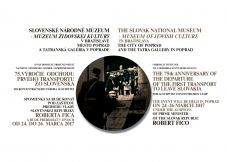 The event will be held over three days in Poprad under the auspices of Prime Minister of the Slovak Republic, Robert Fico. A number of lectures and musical events will be followed by a commemoration on 26 March at the memorial plaque to the victims of the Holocaust at the Poprad Railway Station.

Slovakia is one of IHRA's 31 Member Countries.

The IHRA united governments and experts to strenghthen and advance Holocaust education, remembrance and research and to uphold the commitments of the 2000 Stockholm Declaration.