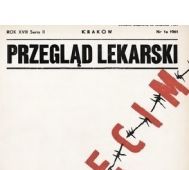 31 volumes of “Medical Review - Auschwitz” have been made available online by the Cracow Medical Society. The collection comprises all original volumes of writings, selected articles in English, and the 1962 volume in three language versions (German, French and Russian) The State Museum Auschwitz-Birkenau is a partner of the project.

“Medical Review - Auschwitz” is an academic journal dedicated to the medical, psychological and social effects of persecution in the German Nazi concentration camps. The periodical was published by the Cracow Medical Society in the years 1961-1991. The documentation numbers over 1000 articles and was based on specialised studies of several thousand former prisoners who survived the concentration camps. The collective work of 477 authors is a significant source of knowledge about the pathology of war and functioning of the camps.

The founders of the journal were two physicians and former prisoners of concentration camps - Antoni Kępiński (1918–1972, prisoner of the camp in Miranda de Ebro in Spain) and Stanisław Kłodziński (1918–1990, prisoner of Auschwitz-Birkenau). The project developed over the years, and its coverage went far beyond issues related to the Auschwitz camp (which was the original intention of the creators), becoming a publication on all the German Nazi concentration camps. The editorial team of the magazine included Prof. Józef Bogusz, Ed. Jan Masłowski and Prof. Zdzisław Ryn, among others.