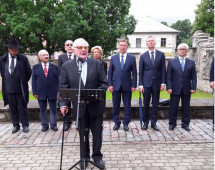 On 4 July, 2017,  the official ceremony commemorating the Holocaust victims in Latvia was opened by the Speaker of Parliament, Ināra Mūrniece, in presence of the Prime Minister of Latvia Māris Kučinskis, Members of Government, Chairman of the Council of  Jewish Communities Arkady Suharenko along with representatives of the Diplomatic Corps, the Holocaust survivors, representatives of the Association of German cities “Riga Committee”, schoolteachers (participants of the Holocaust seminar) and wider public.

Since its establishment in 1990, the official Commemoration Day of Genocide against the Jews in Latvia is 4 July. This date in history marks the beginning of the events of the Holocaust in Nazi-occupied Latvia. On 4 July,1941, Nazis and their local collaborators burned down the Choral Synagogue with victims locked inside the building.

Latvia has been a Member Country of the International Holocaust Remembrance Alliance since 2004.