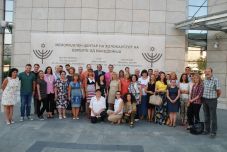 From 30 August to 1 September forty history teachers from Bulgaria and the former Yugoslav Republic of Macedonia participated in the joint educational seminar entitled “The Holocaust as a starting point: comparing and sharing” held in Skopje. The main goal of the seminar was the promotion of academic approaches to studying history, in particularly on Holocaust-related topics.

Topics covered in the seminar included the history of antisemitism,  the Holocaust in Europe, and remembrance culture. The seminar also included two pedagogical workshops on new forms of antisemitism in social media and how to deal with racial prejudice. The seminar participants visited the Tobacco factory – Monopol, the site where 7,144 Jews from Skopje were collected and deported to the Treblinka death camp in occupied Poland in 1943.

The participants noted that the seminar contributed to a better understanding of the historical context of the Holocaust and highlighted common points of convergence.  In this context it was agreed that a second joint seminar would be held in Bulgaria in 2018.

The seminar was organized by the Holocaust Memorial Center for the Jews from Macedonia, Skopje and Memorial de la Shoah, Paris, with support of both ministries of education, as well as of the Federal Ministry of Foreign Affairs of Germany. The lectures at the seminar were presented by eminent professors and experts from the former Yugoslav Republic of Macedonia, Bulgaria, France, Germany and Belgium.