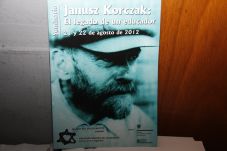 The Holocaust Museum of Buenos Aires and the Polish government inaugurated a seminar on Janusz Korczak on 21-22 August in Buenos Aires.

The event was part of a series of activities marking the 70th anniversary of the death of Korczak, which occurred in August 1942 after he was transported along with 192 Jewish orphans to Treblinka.

The seminar, entitled "Janusz Korczak: The Legacy of an Educator," was attended by over 200 teachers.  Upon completion, educators received educational materials provided by the museum and by the Ministry of Education.

Holocaust Museum of Buenos Aires President Alejandro Dosoretz stated that the objectives of this conference are to "learn in order to transmit, to keep alive the memory of Korczak and to promote his message."

Participants and speakers included Argentinean Federal Judge Daniel Rafecas, Israeli professor Iosi Goldstein, and Sebastian Rejak from the Polish Ministry of Foreign Affairs, among many others.

The cultural attaché of the Polish Embassy in Argentina, Edyta Kwiatkowska-Faryś, said that the decision of the Polish Government to designate 2012 as the "Year of Janusz Korczak" aimed to rescue and spread its legacy.  "It is considered an excellent model for educators.  This year 2012 we remember the 70th anniversary of the death of Janusz Korczak in the Treblinka extermination camp, but also celebrate the centenary of the founding of the first Korczak orphanage, Dom Sierot (The Orphans Home), where the "Old Doctor" could see and make their teaching singular," she said.

Throughout 2012, Poland is celebrating the life and works of Janusz Korczak with the "Year of Janusz Korczak," which includes a series of events and publications in honor of his contribution to literature and science.  More information can be found here.