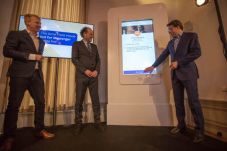 The chat-bot was released on 21 March at the museum by Prince Constantijn of the Netherlands in honor of International Day for the Elimination of Racial Discrimination. The bot is designed to provide people with information on the life story of Anne Frank in a personalized chat conversation, as well as practical visitor information on the Anne Frank House.

“We want to share the life story of Anne Frank with as many people as possible,” Ronald Leopold, managing director of the Anne Frank Foundation, said in the statement. “People from all over the world can now receive instant answers to their questions about Anne Frank, her family, Anne’s diary, and the era they lived in. With this bot, Facebook Netherlands offers us an innovative possibility to reach a big audience, especially youngsters.”

The prince said the bot, which is powered by deep learning Artificial Intelligence, is more than a “fun gadget.”

“It is a way to reach people all over the world and inform them about Anne Frank’s life and warn them for the risks and effects of racism and discrimination,” he said. “That is ultimately what new technologies should be used for: to better our lives and conquer the challenges society faces.”

The Anne Frank House said it is one of the first museums worldwide to use this technology on the Facebook Messenger platform.

Read more on the website of the Anne Frank House