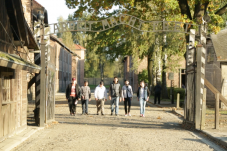 The educational project, "Young Muslims in Auschwitz", run by "Offene Jugendarbeit" in Duisburg, Germany, seeks to engage German Muslim teens in dialogue about history, antisemitism, and stereotypes through a visit to the Auschwitz-Birkenau Memorial and State Museum.

The project, which has been managed in cooperation with “HeRoes Duisburg” since 2011, employs specific pedagogical methods based on the conviction that the preconditions for Muslim teenagers differ from teenagers of German descent. The project participants, aged between 16-21, have Turkish, Arab and Kurdish roots and many of them have grown up with sterotypes against Jews and doubts about the Holocaust.

Project leader, Burak Yilmaz,  underlines: "I believe that we, as Muslims in Germany, have to face the issue of antisemitism in our own community. That is very, very important to me."

Although many participants have dealt with German history at school, they commonly report having difficulties identifying with it due to their personal experiences of discrimination. To quote one of the young people: “Why should I care about German history if a teacher gives me the feeling that I am not a proper German?”

The visit to the Auschwitz-Birkenau Memorial and State Museum brings to the surface feelings of sadness, anger but also raises the question of identity.  The mixed identity of being German and simultaneously Arab/Muslim at the Auschwitz memorial is particularly challenging for the teenagers, given the fact that Auschwitz is also where they first meet with Israeli citizens.  One of the youngsters reported: “I originally intended to chat with the Israeli people for much longer, to say more than to express my condolences, but honestly I did not dare. I felt somehow inhibited and totally insecure.”

During the visit the teenagers are encouraged to keep a diary and afterwards the project leaders moderate discussion sessions, reflecting on the questions raised by the visit. As a final stage, some of the recent participants developed a play called "Co-exist" about the Middle East conflict.

A film about the recent visit to the Auschwitz-Birkenau Memorial Museum (currently only in German) is available on the website of the Landeszentrale fuer politische Bildung Nordrhein-Westfalen.