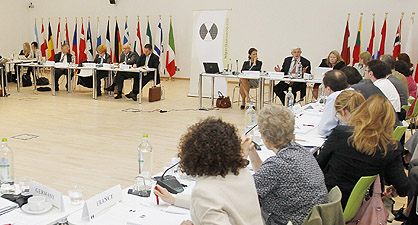 The International Holocaust Remembrance Alliance (IHRA) is an intergovernmental body whose purpose is to place political and social leaders’ support behind the need for Holocaust education, remembrance and research both nationally and internationally.

IHRA (formerly the Task Force for International Cooperation on Holocaust Education, Remembrance and Research, or ITF) was initiated in 1998 by former Swedish Prime Minister Göran Persson.  Persson decided to establish an international organization that would expand Holocaust education worldwide, and asked President Bill Clinton and former British Prime Minister Tony Blair to join him in this effort.  Persson also developed the idea of an international forum of governments interested in discussing Holocaust education, which took place in Stockholm between 27-29 January 2000.  The Forum was attended by the representatives of 46 governments including; 23 Heads of State or Prime Ministers and 14 Deputy Prime Ministers or Ministers.  The Declaration of the Stockholm International Forum on the Holocaust was the outcome of the Forum’s deliberations and is the foundation of the International Holocaust Remembrance Alliance.

IHRA currently has 31 member countries, eleven observer countries and seven Permanent International Partners.  Membership is open to all democratic countries, and members must be committed to the Stockholm Declaration and to the implementation of national policies and programs in support of Holocaust education, remembrance, and research.  Member countries are encouraged to develop multilateral partnerships and to share best practices.

The national government of each member country appoints and sends a delegation to IHRA meetings that is composed of both government representatives and national experts.  In addition to the Academic, Education, Memorials and Museums, and Communication Working Groups, specialized committees have been established to address antisemitism and Holocaust denial, the situation of the Roma and the Roma genocide, comparative genocide, and special challenges in Holocaust education.  The IHRA is also in the process of implementing a Multi-Year Work Plan that focuses on killing sites, access to archives, educational research, and Holocaust Memorial Days.

The IHRA has an annually rotating Chairmanship, and the appointed Chair is responsible for the overall activities of the organization.  The Chairmanship is supported by the Executive Secretary, who is the head of the Permanent Office located in Berlin.  The IHRA also has an Honorary Chairman, Professor Yehuda Bauer, and an Advisor to IHRA, Professor Steven Katz.

One of IHRA’s key roles is to contribute to the funding of relevant projects through its grant strategy.  The purpose of the Grant Programme is to foster international dialogue and the exchange of expertise, increase government involvement in program creation, and target projects with strong multilateral elements in order to create sustainable structures for Holocaust education, remembrance, and research.