A ceremony is held each year to mark the handover to a new Chairmanship.  This handover ceremony takes place in February or March at the embassy of the new Chair country in Berlin.

On 7 March 2017 Switzerland assumed the Chairmanship of the International Holocaust Remembrance Alliance. Switzerland became a member of IHRA in 2004. Switzerland’s chairmanship is rooted in a particular set of values: Respect for minorities and for cultural, political and social diversity is an essential part of Switzerland, just as it is crucial to its existence and its functioning as a state under the rule of the law, thereby ensuring peace, security and equality for all.  An overview of the Swiss chairmanship priorities and media coverage of the chairmanship can be found on the website of the Swiss Federal Ministry of Foreign Affairs in English, French, Italian, and German.

More information about Holocaust education, research and remembrance in Switzerland can be found on the IHRA website.

The Swiss Chairmanship will host two IHRA Plenary meetings during the course of the year, in Geneva in June and in Bern  in November. 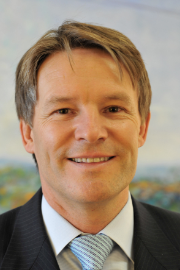 Ambassador Benno Bättig completed his secondary schooling (Maturität) in 1987 at the Gymnasium in Sursee, preceded by a year of study at a high school in the United States. He subsequently graduated with a lic. rer. pol. from the University of Fribourg in 1993. Mr Bättig worked from 1993-1999 first as a desk officer in the Federal Department of Economic Affairs, then in the Export Controls and Sanctions Division of the Federal Office for Foreign Economic Affairs (FOFEA, now SECO), and then from 1995 in the International Industry and Technology Section of the FOFEA. From 1999 to 2002, Mr Bättig served in the Swiss embassy in Washington as first secretary for economics, finance and trade. During that time he pursued his studies at the Kogod School of Business at the American University in Washington, majoring in Finance and International Business, and completing an MBA in 2002. In 2002, Mr Bättig was appointed personal assistant to Federal Councillor Pascal Couchepin, a post which he held until September 2007. From September 2007 until the end of 2009, Mr Bättig worked in the private sector, serving as secretary-general and head of corporate public affairs in the general secretariat of the Galenica Group. From 2010 to January 2012, he was secretary-general of the Federal Department of Home Affairs (FDHA) under Federal Councillor Didier Burkhalter. In February 2012, Mr Bättig followed Didier Burkhalter to the Federal Department of Foreign Affairs (FDFA) to take up the post of secretary-general.
IHRA