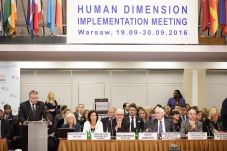 Mark Weitzman, Chair of IHRA's Committee on Antisemitism and Holocaust Denial, urged OSCE adoption of the IHRA working definition of antisemitism at The Human Dimension Implementation Meeting (HDIM) of OSCE.

Mark Weitzman, who is also Director of Governmental Affairs for the Simon Wiesenthal Centre, strongly urged the 57 member countries of the OSCE (Organization for Security and Cooperation in Europe) to officially adopt the working definition of antisemitism that was adopted last May by the International Holocaust Remembrance Alliance.

Weitzman said "At a time when Jewish communities in Europe and elsewhere have come under direct attack, when Jewish schools, synagogues and cultural institutions have to be guarded twenty four hour a day, seven days a week, when political leaders warn of the possibility of their countries Jewish populations being driven out entirely, and when antisemitic incitement floods social media, this legally non-binding definition, which does not impinge on freedom of expression, is an urgent first step in clarifying and fighting Antisemitism.

Weitzman added "We call upon all OSCE countries to follow the leadership of the German Chair in Office, Ambassador Eberhard Ponl, and the Romanian IHRA Chair, Ambassador Mihnea Constantinescu
In adopting this vital tool. Adoption of the Working Definition is not only a necessary political statement, but it is also a moral commitment on the road to translating speech into action and to securing a safe existence for Europe's Jews."

The Human Dimension Implementation Meeting (HDIM) of OSCE participating States was held in Warsaw from 19-30 September and is Europe's largest annual human rights and democracy conference. It is organized every year by the OSCE Office for Democratic Institutions and Human Rights (ODIHR) as a platform for 57 OSCE participating States, Partners for Co-operation, OSCE structures, civil society, international organizations and other relevant actors to take stock of the implementation of the OSCE human dimension commitments, discuss associated challenges, share good practices and make recommendations for further improvement.