UNESCO Supports Recovery of the Archives of Bosnia and Herzegovina 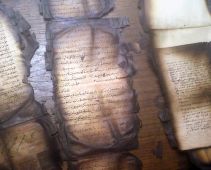 As an immediate response to the damages caused to the materials and collections of the Archives of Bosnia and Herzegovina by a fire set on 7 February 2014, UNESCO launched an expert mission which took place over 3 days, from 19-21 February 2014, in cooperation with the Italian Ministry of Cultural Heritage and Activities (MiBAC) and Ministry of Foreign Affairs.

The mission was composed of experts from the Central Institute for Restoration and Conservation of Library and Archival of Cultural Heritage (ICRCPAL) in Rome, who assessed the damages from the fire and water used for its extinction and produced a detailed technical report including the assessment of damages, the indications of emergency restoration interventions and advice on future measures to improve preventive conservation.

Although some important collections from the period 1878-1918 are irretrievably lost, the mission members, in cooperation with the staff of the Archives of Bosnia and Herzegovina, established a set of measures to avoid further decay and rescue documentation damaged by water.

During the mission, experts also underlined the importance of institutional cooperation and offered the possibility of training the employees of the Archives of Bosnia and Herzegovina within ICRCPAL.

As agreed, UNESCO will closely continue to support recovery actions, including possibly the organization of a follow-up expert mission in the next future, as well as further efforts to mobilize resources in order to implement the measures already proposed by the experts.

The mission has been organized and coordinated by the UNESCO Regional Bureau for Science and Culture in Europe, Venice (Italy), and its Antenna Office in Sarajevo, aiming at the safeguarding of the Archives of Bosnia and Herzegovina and restoring the damage caused to important archival artifacts.

“This heritage is part of our collective knowledge and memory, which is important not just for the citizens of Bosnia and Herzegovina, but equally important for the history of the South Eastern European countries and Europe itself, and that is why UNESCO will spare no effort to ensure its safeguard,” stated Sinisa Sesum, Head of the Antenna Office in Sarajevo.