Third Regional Forum on the Prevention of Genocide in Bern, Switzerland 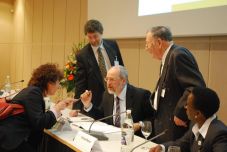 This week in Bern, the Swiss Federal Department of Foreign Affairs is hosting the Third Regional Forum on the Prevention of Genocide.

The event, co-organized with Argentina and Tanzania, is the third in a series of regional meetings dedicated to the topic of the prevention of genocide.  Previous conferences were held in Buenos Aires, Argentina in 2008 and in Arusha, Tanzania in 2010, and a fourth forum is planned for Asia in 2012.

The forums were initiated following appeals made by both the former and the current UN Special Advisers on Genocide Prevention, Juan Mendez and Francis Deng, who strongly encouraged all efforts to strengthen regional initiatives to prevent genocide.  The meetings aim to lay the foundation of regionally-based networks of countries committed to the prevention of genocide.  The goal of the Bern forum is to broaden the outreach of genocide prevention in Europe, analyze the lessons learned with a special focus on the European experience, and identify initiatives that could be developed in order to contribute to genocide prevention.  Additional objectives include evaluating existing standards and mechanisms for sanctioning and preventing genocide, identifying political, cultural, religious, and legal challenges to the prevention of genocide, and identifying how sanctions can reinforce both prevention and the guarantee of non-recurrence.  The long-term goal is to create a network of states willing to be proactive in this field.

Attendees of the Bern Forum, which takes place from the 4-6 April, include ambassadors, government officials, representatives of international organizations, and NGOs.  ITF Chair Ambassador Karel de Beer presided over the panel entitled "Preventing Genocide: Role and Responsibilities of State and International Actors and Ways Forward."  Yehuda Bauer, Honorary Chair of the ITF, and Dr. Kathrin Meyer, Executive Secretary of the ITF, participated as invited speakers in the panel discussions.