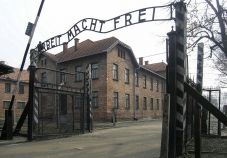 The Holocaust Educational Trust has offered to work with two students recenly caught stealing fragments of hair clippers, buttons and a piece of a spoon from the Auschwitz-Birkenau State Museum.

The two teenagers were on an educational trip from a school in Cambridge, England when museum guards alerted Polish authorities to the possible theft.  The Holocaust Educational Trust (HET) chief executive Karen Pollock stressed: “Every single artifact found at Auschwitz-Birkenau tells a story of the more than a million people who were ruthlessly murdered by the Nazis there and this incident serves to show why our work is crucial now more than ever."

She called it a “duty” to provide the next generation with a Holocaust education to “prevent ignorance and hate,” adding that in 15 years of organizing trips to Auscwhitz-Birkenau, no such incident had been reported. She added that the HET "would gladly work with these young boys to ensure they understand the implications of their actions although this is now a matter for the police.”

According to a spokesperson for the Perse School, where the boys studied, the two had apologized profusely to authorities and claimed that they “picked up the items without thinking."