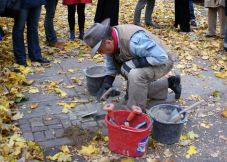 The German artist responsible for the Stolperstein project, Günter Demnig, will personally lay the stone at the house in Kamenna street. More than 55,000 stones have been laid in more than 20 European countries. In Slovakia, the first Stolperstein was laid in 2012. Head of the Slovak Delegation to the International Holocaust Remembrance Alliance, Ambassador Milan Kollar, will attend the event.

Image: By Erfurth - Own work, CC BY 3.0. Artist Gunter Demnig lays a Stolperstein for Gertrud Hille in Dresden.