Slovakia remembers the victims of the Holocaust 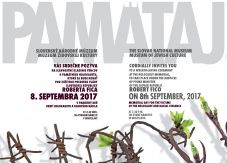 Each year the Museum of Jewish Culture organises a commemorative event on the grounds of the main memorial for the victims of the Holocaust in Bratislava, which is attended by the highest officials in the country. This commemoration is held under the auspices of the Prime Minister of the Slovak Republic and in 2017 will be held on 8 September at 14:30. On 7 September the museum will also hold a book presentation of a new edition of the diaries of Dr. David Fischer, entitled 'Bunkerblaetter' and written in hiding in Bratislava.

On 9 September, many other events will be held in towns throughout Slovakia, including commemorations, exhibitions, conferences, seminars, lectures, and cultural and educational events in schools, libraries, and institutions. A minute's silence is held in commemoration of the day in the National Council of the Slovak Republic (Parliament) and in schools.

Slovakia has been an IHRA Member Country since 2005 and the Head of Delegation is Ambassador Milan Kollar, Director of Human Rights Department at the The Ministry of Foreign and European Affairs of the Slovak Republic.