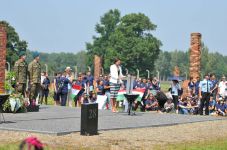 On 2 August 2014 over 1,000 people gathered at Auschwitz II-Birkenau to commemorate the 70th anniversary of the liquidation of the so-called "Gypsy Family Camp" where in 1944 nearly 3,000 Roma and Sinti were killed.

Roma and Sinti from 25 European countries were in attendance as well as a number of Roma rights groups, delegates of the United Nations, the European Commission, the European Parliament and government officials.  The event aimed not only to commemorate the victims, but to raise awareness of the Roma genocide and to draw attention to the continued violence and discrimination faced by Roma and Sinti in Europe today.

In 2011 the Sejm of Poland declared 2 August as the official Roma and Sinti Genocide Remembrance Day.