Publication: "Escalating into the Holocaust" 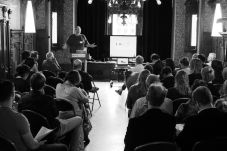 The final publication emerging from the project "Escalating into Holocaust" is now available online. The publication comprises a collection of selected works, presentations, lectures and articles gathered during 6 public events organized in Belgrade, Nis, Amsterdam, Kragujevac, Stockholm and Novi Sad during 2016 and 2017 within the framework of the project.

Through the series of six public events in Serbia, Sweden and the Netherlands, the project gathered international experts to present and discuss the broader European aspects of the Holocaust, and exchange experiences and best practices in the fields of Holocaust research, commemoration and education. By taking the Holocaust in Serbia as a starting point, in order to further discuss the Holocaust as a shared European narrative that defines European values of diversity, tolerance and Human Rights, the discussions and public debates during the six international events reflected upon the current European challenges in facing intolerance, antisemitism, anti-Romanyism, xenophobia, nationalism and rising far-right movements.

Among the authors who contributed their works to the publication are:  Dr Milan Koljanin, Institute for contemporary History in Belgrade; Dr Akim Jah, International Tracing Service (ITS) in Bad Arolsen; Dr Susanne Heim, Institute of Contemporary History Munich - Berlin; Dr Sanela Schmid, Researcher in Editionsprojekt “Judenverfolgung 1933–1945” from Nuremberg; Dr Erik Somers, NIOD Institute for War, Genocide and Holocaust Studies in Amsterdam; Mikhail Tyaglyy, Ukrainian Center for Holocaust Studies; Dr Nevena Daković, Film Studies at the Dept. of Theory and History at the University of Belgrade; Dr Čedomila Marinković, Rade Ristanović, Silvija Krejaković as well as other scholars and experts from Serbia and other countries.

A particularly important contribution to the future research of the Holocaust in Serbia is the creation of a new searchable database of prisoners of the Sajmište concentration camp.  The database cross-references different pre-war archival sources (jobs, bank accounts, addresses, properties, school recordss etc) to reveal more about the pre-war life of the Jewish victims from Belgrade murdered at Sajmiste concentration camp. In addition to the victim database, further results of the project are the exhibition "October 1941" and the teaching material "Ester".

The project "Escalating into Holocaust" was carried out from September 2015 to February 2017 by the Historical Archives of Belgrade and the partnering organizations/institutions: Center for Holocaust Research and Education from Belgrade, NIOD Institute from Amsterdam, Dept. for Cultural Studies of the University of Rijeka, and Terraforming.

Read more about the project