Protocol Agreement Signed on Establishment of a Riga Ghetto Museum 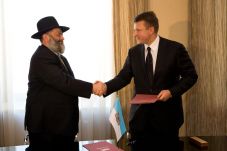 On 2nd February 2010 the vice-mayor of Riga, Ainars Shlesers, and Chairman of the Jewish community organization „Shamir", Rabbi Menachem Barkahan, signed a protocol of intentions on the foundation of a Riga Ghetto Museum.

More than 70 000 Latvian Jews were killed during the Holocaust and 20 000 Jews from Germany, Czech Republic and Hungary passed through the Riga Ghetto, an area of the city which has remained largely untouched since the end of World War Two.The Riga Ghetto Museum will be located in the historical part of the city, and will seek to provide visitors with an insight into the daily life of ghetto inhabitants, as well as documenting resistance within the ghetto.