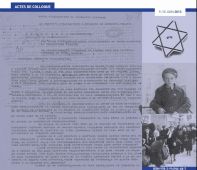 In June 2013 the Mémorial de la Shoah initiated an ambitious three-part project focused on southeastern Europe:  a symposium on the fate of the Jews in Bulgaria and the territories under Bulgarian administration in June 2013, an exposition and symposium on Thessaloniki in February 2014, and a series of events around the history of the Holocaust in Bosnia and Herzegovina, Croatia, and Serbia in March 2014.

The projects were made possible through the support and partnership of IHRA, the Ghetto Fighters’ House Museum, and CERI-Sciences Po.  The symposium on the fate of the Jews in Bulgaria and the territories under Bulgarian administration was coordinated by Nadège Ragaru, a historian and researcher at CERI-Sciences Po.

Mémorial de la Shoah has now published the proceedings of the symposium on their website.  The publication is in both English and French.