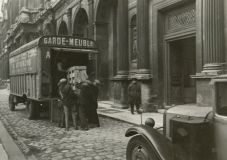 The Conference for Jewish Material Claims Against Germany and the U.S. Holocaust Memorial Museum have launched a digitized online database of over 20,000 artworks stolen by the Nazis.

More than 20,000 pieces are now searchable for free by visiting the project's website. The huge cache of records, meticulously kept by the Nazis on index cards, details but one fraction of the widespread procurement of Jewish cultural properties. The Einsatzstab Reichsleiter Rosenberg (ERR) was a special Nazi agency tasked to collect Jewish-owned artworks for resale back into the market, destruction, or integration into the lavish private collections of top Nazi officials.

Marc Masurovsky, the project's director, said that the items in the database represented the "tip of the iceberg". An estimated 650,000 artworks were confiscated by the Nazis in occupied Europe, including works by Pablo Picasso, Vincent Van Gogh, Salvador Dali and Claude Monet. Furthermore, it is estimated that between 100,000 to 200,000 works are still missing.

This database is focused on ERR spoils from occupied France and Belgium between 1940 and 1944, many from Jewish residences, bookstores, and businesses in Paris. In a comment to Reuters, Wesley Fisher from the Claims Conference and delegate of the ITF, said, "This is probably the most famous of the (Nazi) lootings...The general assumption is that most of these things have been returned, but it turns out not to be true."

This new database makes it possible for individuals and institutions to make inquiries into works whose histories have hitherto been mysteries. Claims Conference Chairman Julius Berman said that "it is now the responsibility of museums, art dealers and auction houses to check their holdings against these records to determine whether they might be in possession of art stolen from Holocaust victims".