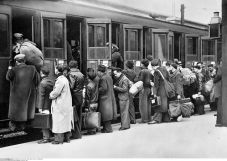 The website’s goal is to centralize information on compensation and reparations proposed by the French government to French and foreign Jews who were victims of persecution enforced by Nazi Germany and the Vichy regime during World War II. It is available in French, English, and Hebrew, and an English-language help line is also available in the United States, primarily to assist in filling out applications. As the legislation evolves within the French government, the information on the website will be modified accordingly.

Information on the site is available for victims who were deported from France, interned in France, or whose parents died in a French camp or during deportation. Victims of spoliation (movable or real estate properties, artwork, bank accounts, or insurance claims) can also find information on the website. Reparations for spoliation are handled by the CIVS (Commission for the Compensation of Victims of Spoliation), an organization under the jurisdiction of the French Prime Minister.

The website also contains a comprehensive list of social and medical programs implemented by the Jewish Organizations of France for Shoah survivors.