Museum of the History of Polish Jews Opens in Warsaw 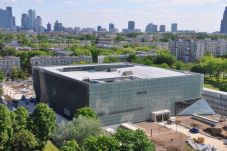 The Museum of the History of Polish Jews officially opened on 19 April 2013 on the site of the former Warsaw Ghetto.

This date marks the 70th anniversary of the Warsaw Ghetto uprising.

The multimedia narrative museum and cultural center was initiated by the Association of the Jewish Historical Institute of Poland in Warsaw in 1996, and is the first and only museum to focus on the history of Polish Jews.  When the permanent exhibition is completed next year, it will cover the thousand-year history of Jews in Poland.

Through historical research and innovative exhibition design, the museum will encourage exploration through a wide range of media, documents, and artifacts.  As a cultural and educational center, the Museum will provide a unique learning environment, public programs, and serve as a meeting place for a diverse public.  The museum welcomed over 15,000 visitors during it's first open house from 20-21 April.

Norway has provided NOK 22 million in funding to the museum through the EEA and Norway Grants. The Holocaust Centre and Falstad Centre, both represented in the Norwegian delegation to the IHRA, are among the Norwegian institutions that will cooperate with the new museum in developing activities for reviving the memory and raise awareness of Jewish history and culture in Poland.