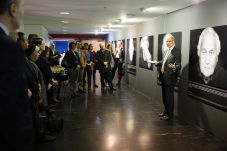 On 16 November, 2017, the acting IHRA Chair, François Wisard, presented the Swiss Chairmanship’s projects and the IHRA’s latest activities to ambassadors of IHRA Member Countries and others on the occasion of a special tour of the exhibition “The Last Swiss Holocaust Survivors”. The event was organized by the Gamaraal foundation, headed by Anita Winter, who came up with the concept for the travelling exhibition, which was also displayed the IHRA Plenary in Geneva.

The acting Chair spoke of the three priorities of the Swiss Chairmanship – youth, education and social media – and stressed that in many of the projects funded under the Swiss Chairmanship, Holocaust survivors and their stories were at the core of the activities. He also highlighted the many activities carried out in Switzerland since the 1990s on the topic of survivors and their testimonies.

The exhibition “The Last Swiss Holocaust Survivors”, with its impressive portraits and video messages from survivors, is a vivid example of putting Holocaust survivors in the centre-point.

Another project focused on the translation of the memoirs of Swiss Holocaust survivors – many of them portrayed in the exhibition – from the original German into French. Some of these translations were undertaken by school classes and provide a possible example of Holocaust education in a time when the last Holocaust Survivors are increasingly elderly and may soon stop speaking about their tragic experiences.

A third project focused on survivors of the Holocaust who were rescued by Swiss diplomats living in Budapest, the best known among them being Carl Lutz, whose step-daughter, Agnes Hirschi, herself a Holocaust Survivor, is also portrayed in the exhibition. The testimonies of the people saved by Lutz and his team were gathered by Charlotte Schallie, a Canadian historian, and Agnes Hirschi. The extensive collection of these testimonies has been published under the title “Under Swiss Protection” and will be handed out to all IHRA delegates at the IHRA Plenary in Bern.

The acting Chair briefly spoke of two other projects, one focusing on social media involving the development of an app for students to explore the lives of children fleeing the Holocaust, the other being an academic conference focusing on teaching and learning about the Holocaust.

Following the speech of the acting  IHRA Chair, the diplomats were able to explore the exhibition and talk with Ivan Lefkovits, survivor of Ravensbrück and Bergen-Belsen.