ITS Director on Refugees 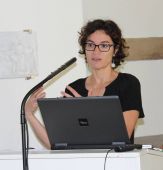 On 13 July, International Tracing Service Director Floriane Hohenberg gave a public lecture about the current refugee situation in Europe and the role of the ITS in raising awareness regarding issues such as war and persecution.

At the public lecture “The refugee crisis and human rights in terms of my work for OSCE and the ITS” in the Christian Daniel Rauch Museum in Bad Arolsen, the ITS Director explained "We want to bring our documents out into the world, to facilitate understanding about what happened in the past and to create awareness for the fact that the repercussions of the past are felt for decades."

By drawing on its documentation, the ITS can help raise awareness for the issues of persecution, flight and migration, and show what long-term effects discrimination, war, and persecution have on victims and their families.  The ITS exhibit on Displaced Persons  can also help make clear to society what it means to have to start over again, far from home.

Hohenberg, who served as Head of the Tolerance und Non-Discrimination Department at the Office for Democratic Institutions and Human Rights (ODIHR) of the Organizations for Security and Cooperation in Europe (OSCE) until the end of 2015 said that Europe has to face the fact that the current refugee migrations will continue.

As a consequence of World War II millions of people found themselves on the move. In Germany alone there were more than 10 million Displaced Persons by the end of the war.

The International Tracing Service is one of IHRA's seven permanent international partner organisations.