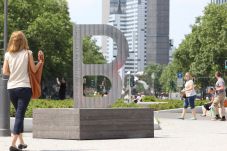 The International Auschwitz Committee’s sculpture “To B Remembered” opened to the public on 12 June 2013 in Berlin.

A cynical lie: the inscription above the main gate to Auschwitz 1 that reads “ARBEIT MACHT FREI” (work sets you free).  When the SS ordered them to make this sign, the prisoners placed their hidden message in the word “ARBEIT”: they turned the letter “B” upside down.  They were enraged by the endless fear, the everyday humiliations, the beatings, the hatred and the murder that they were forced to witness. They created a mark of their courage, their will to overcome the fear, to survive and later to tell the world about what happened in Auschwitz.  Today, and into the future, the inverted “B” will always symbolise the message from the prisoners to coming generations:  “Remember: when injustices take place, when people are discriminated against and persecuted – never remain indifferent. Indifference kills.”

Side by side, young trainees from Volkswagen AG and Polish colleagues have been taking up this message from the survivors for many years. They help to preserve the Auschwitz Memorial, they meet survivors, and they actively support the International Auschwitz Committee.

The sculpture will be placed at Wittenbergplatz in Berlin for four months before touring additional cities around the world.