The Holocaust in German and Dutch History Textbooks 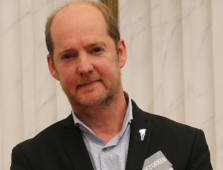 The International Holocaust Remembrance Alliance is pleased to congratulate delegate Marc van Berkel, a member of the Delegation of the Netherlands, on successfully defending his Phd. entitled ‘Plotlines of Victimhood. The Holocaust in German and Dutch History Textbooks, 1960-2010’ at the Erasmus University Rotterdam.

Before the 1960s, most history textbooks in Western Europe hardly contained any information about the ‘Holocaust’. This was partly because contemporary history was stilll a rudimentary part of the history curriculum. In addition, many teachers and textbook authors did not seem to be willing to discuss the persecution of the Jews in the classroom. Other (military) aspects of the Second World War gained more attention. Anno 2017, the situation has changed completely: the Holocaust has become one of the most important historical themes in the national curricula of many (western) countries. In 2010, National Socialism and the Holocaust became mandatory parts of the secondary education curricula in Germany and the Netherlands. Marc van Berkle examines fifty years of narrating the Holocaust in history textbooks for upper secondary education, published between 1960 and 2010, in North Rhine-Westphalia (one of the federal states of Germany) and the Netherlands. The central research question was: Which narrative plotlines of victimhood and agency about the Holocaust are present in German and Dutch history textbooks between 1960 and 2010, and how can possible changes in these plotlines be explained?

The recommendations following this research are enhancing closer relationships between textbooks authors, publishing companies and academic researchers, deconstructing national narratives through offering international multiple perspectives and conflicting opinions, and engaging more research into the use of history textbooks in education, especially about taxing subjects as the Holocaust.

Marc van Berkel is a research associate at the University of Rotterdam and teacher trainer at HAN University of Applied Sciences Nijmegen, and has been a member of the Delegation of the Netherlands to the IHRA since 2015. He is currently involved in coordinating the IHRA project ‘Seeking Protection’, a blog which explores how our knowledge of the refugee situation before, during and after the Holocaust can be relevant for understanding the current refugee situation. The blog aims to serve as a resource centre for educators and as a platform for guest bloggers to reflect on the topic of refugees.

The International Holocaust Remembrance Alliance unites governments and experts to strenghten, advance and promote Holocaust edcuation, research and remembrance and to uphold the commitments to the 2000 Stockholm Declaration.