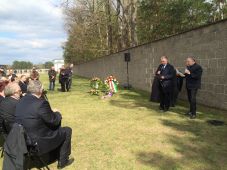 On Sunday 19 April, the IHRA Chair Szabolcs Takacs, spoke at an unveiling ceremony for a plaque in honour of the Hungarian victims of the Sachsenhausen concentration camp, outside Berlin.

The ceremony took place on the 70th anniversary of the liberation of the camp. The Director of the Memorial and Museum Sachsenhausen, Prof. Dr. Günter Morsch, also spoke at the unvieling, along with the Hungarian Ambassador Mr Jozsef Czukor who noted that two years previously he had promised that a plaque would be installed. The Hungarian Embassy in Berlin and the Museum and Memorial Sachsenhausen hope to cooperate to encourage research into the fates of the Hungarian victims of Sachsenhausen.

In a speech held in Hungarian, State Secretary Takacs underlined the priorities of Hungary's IHRA Chairmanship; stressing the focus on antisemitism, education about the Holocaust as well as the genocide of the Roma. He stated: " Remembrance of the Holocaust is not a task, but rather a moral obligation". He also quoted the following line from IHRA's founding document, the Stockholm Declaration: "We share a commitment to commemorate the victims of the Holocaust and to honour those who stood against it."

On the plaque is a quotation by the Hungarian poet János Pilinszky.

Earlier in the day a plaque was also unveiled in memory of the Hungarian victims who perished in the Ravensbrueck camp.