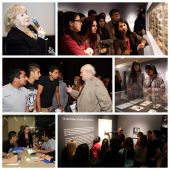 As part of Jewish Heritage Month in Ontario, Canada the Sarah and Chaim Neuberger Holocaust Education Centre partnered with the Art Gallery of Ontario (AGO) to present its 35th Annual Student Symposia on the Holocaust.

Over 400 public and Catholic school students from across the Greater Toronto Area took part in the educational activities on 14 and 21 May, 2015. The Neuberger’s educational team under the leadership of Dr. Carson Phillips developed a series of learning programs to engage students in the critical study of the Holocaust. A specific focus was placed on the role of the ghettos in the destruction of European Jewry. Central to the educational experience were guided tours of the exhibition Memory Unearthed:The Lodz Ghetto Photographs of Henryk Ross.

The daylong program for High School students featured a screening of a specially created documentary titled Voices of the Lodz Ghetto. The film recounts the experiences of Manny Langer and Sally Rosen, each of whom survived over three years in the Lodz Ghetto. Mr. Langer and Mrs. Rosen have been long time volunteer speakers with the Neuberger and engaged in a facilitated discussion with symposia participants.

The day was rounded out with small group workshops that focused on discovering history through primary source materials. Teachers and students were encouraged to continue the learning on returning to their classrooms by using memoirs of Holocaust survivors, provided by the Azrieli Foundation.