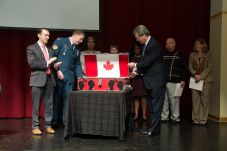 In the fall of 2013, the Consulate General of Canada in Atlanta partnered with the Georgia Commission on the Holocaust to promote Holocaust remembrance and education.

To recognize this partnership the Georgia Commission on the Holocaust asked students of Westside Middle School in Winder, Georgia, to decorate a special trunk as part of the statewide Holocaust Learning Trunk Project.

The Learning Trunk Project is an initiative of the Georgia Commission on the Holocaust (GCH). Each trunk is uniquely designed by students from across the state.  Once decorated, the trunks are filled with books, DVDs and other learning materials and are placed in schools for classroom use.

The students specifically designed artwork commemorating Westerbork transit camp, which was liberated by Canadian troops on 12 April 1945.  The Canadian War Museum provided information and photos used by these students.

In Canada the poppy is a symbol of remembrance. Although poppies are worn each year on Remembrance Day in November, the students are wearing the pins to recognize not only the theme of the trunk they created but to honor and memorialize the men and women who serve Canada in times and war and of peace.

The trunk was unveiled by Consul General Stephen Brereton, Canadian Special Forces Sergeant Scott Walker, and International Holocaust Remembrance Alliance Chair Dr. Mario Silva on December 10th for "Remembering and Teaching the Holocaust in the 21st Century" at The Galloway School in Atlanta. The event was hosted by the Canadian Consulate General of Atlanta in partnership with the Georgia Commission on the Holocaust.

View a video about the Holocaust Learning Trunk honoring Canada.