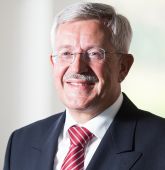 On 6 December 2017, the Swiss Embassy to the United States will hold a panel discussion entitled "Holocaust Education, Youth and Social Media" within the framework of the Swiss Chairmanship of the International Holocaust Remembrance Alliance. The event is hosted by Ambassador of Switzerland to the United States, Dr Martin Dahinden and includes the participation of Head of the United States Delegation to the IHRA, Thomas Yazdgerdi.

With the Holocaust receding in time and the last survivors passing away, the challenges of teaching the history of the Holocaust are only increasing. Surveys show that high school students in Europe and North America often have only very basic knowledge about the Holocaust. It is obvious that new avenues must be explored to better reach young people. The panel of four experts and scholars will discuss the main trends in Holocaust education and the dangers, opportunities and impact of the use of social media on Holocaust education. Panelists include Dr Jeffrey Shandler, Professor of Jewish Studies at Rutgers University and Dr Kori Street, Senior Director of Programs and Operations at the USC Shoah Foundation.

The event is organised in cooperation with the Anti-Defamation League and is invitation-only.

Switzerland will hold the Chairmanship of the IHRA until March 2018. The IHRA Chair is Ambassador Benno Baettig.

The International Holocaust Remembrance Alliance unites governments and experts to strengthen, advance and promote Holocaust education, research and remembrance and to uphold the commitments to the 2000 Stockholm Declaration.