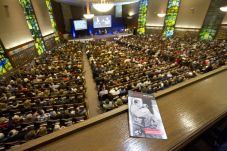 The Neuberger’s 37th Annual Holocaust Education Week in Toronto, Canada reached an estimated 30,000 members of the general public, who took part in programming across the Greater Toronto Area.

A capacity audience of 1400 members of the public, along with government representatives, filled Adath Israel synagogue for the opening night. In conversation with broadcast journalist Caryn Lieberman, Niklas Frank - son of Hans Frank the notorious Governor General of Nazi-occupied Poland, revealed his candid and deeply personal thoughts on his father’s guilt and responsibility in the Holocaust.

Throughout the week of 2-9 November, programming continued in synagogues, churches, mosques, libraries and schools on the topic of pivotal moments that have defined our understanding of the Holocaust. Programs included film screenings, cultural productions and exhibitions in addition to lectures and panel discussion presented by internationally known speakers. Highlights from the week included Dr. Kori Street as Educator-in-Residence who taught teachers and students about the varied uses of the USC Shoah Foundation’s IWitness program, Dr. Roman Töppel who discussed the intensive research and work behind the publication of the Critical Edition of Mein Kampf, Maestro Murry Sidlin who explored the themes of spiritual resistance in Theresienstadt as depicted in the documentary Defiant Requiem, and a special film series that included films such as Im Labyrinth des Schweigens (2014), Der Staat gegen Fritz Bauer (2015) and 1945 (2017) to elucidate some of the pivotal moments that have shaped our understanding of the Holocaust.

The week concluded with a poignant commemoration of the November Pogrom at Beth Torah synagogue with over 900 members of the general community in attendance. Dr. Danielle Spera, director of the Jewish Museum Vienna, described her institute’s role as not just a repository of artefacts but as one of Vienna’s epicenters of Jewish life and culture today. With programming that reached across Toronto’s diverse demographic, Holocaust Education Week 2017 successfully engaged new audiences ensuring a vibrant future for Holocaust education and awareness in Toronto.