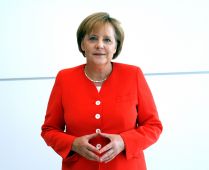 “Chancellor Merkel has demonstrated an unwavering commitment to making the preservation of Holocaust memory a priority for Germany,” said Tom Bernstein, who chairs the council governing the museum, in a release Thursday. “The Museum has partnered with the German government and institutions on many initiatives, and those partnerships have only grown deeper and more fruitful under Chancellor Merkel.”

Angela Merkel will receive the award on April 24 during the museum’s National Tribute Dinner, which takes place on Yom Hashoah in Washington, D.C. Merkel will accept the honor by video from Germany.

The honor was named for Elie Wiesel, the Holocaust memoirist and Nobel Peace Prize laureate who helped found the museum.