Final Chord of the Requiem for Auschwitz Project 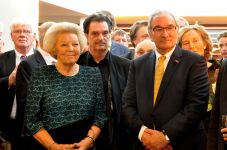 The Dutch princess and former queen of the Netherlands Beatrix attended the final chord of the Requiem for Auschwitz Project on Wednesday 30 October in the Theatre of Tilburg. The Requiem is an important piece of music intended to remember all victims of Auschwitz including the Roma and Sinti who were killed during the Nazi Regime.

The gathering in Tilburg opened Wednesday with an introduction on the musical piece by the self-educated Sinti composer Roger Moreno Rathgeb. He told the audience how he visited Auschwitz-Birkenau ten years ago and, overcome by grief and disbelief, decided to express his feelings in music. He chose to write a requiem and dedicated it to the victims of the Nazi Regime.

To pass on the message of the requiem to next generations secondary school pupils from Tilburg attended the final chord of the Requiem.  The Royal Gipsy Orchestra Roma Mirando also performed lead by conductor Roma Mirando and accompanied by Tomy Varadi (violin), Bokki Vink (cymbalom) and students from the Sinti Musical Academy from Arnhem.

The Requiem for Auschwitz was first performed in The New Church in Amsterdam on 3 May 2012 by the Roma and Sinti Philharmoniker from Frankfurt am Main. An integral recording was broadcasted during the National Commemoration in the Netherlands on the eve of 4 May. Performances in several European cities followed this initial event.

During the tour, the performances were accompanied by a program including exhibitions, discussions, films and documentaries about the (recent) history of Sinti and Roma. One of the projects that accompanied the Requiem is a digital exhibition about the genocide on the Roma and Sinti on romasinti.eu.  This interactive website deals with the persecution of Roma and Sinti during the Nazi period through personal stories of six children. The exhibition includes an archive and is available in several languages including Czech, German, English, Dutch and Polish.

The International Holocaust Remembrance Alliance (IHRA) co-funded the educational and awareness raising parts of the project. The Requiem for Auschwitz Project was initiated by the director of the Alfa Foundation Albert Siebelink, former director of Spolu International Jef Helmer and respected leader of the Dutch and International Roma and Sinti community Zoni Weisz.

Image gallery: Chord of the Requiem for Auschwitz Project

Click on one of the images to view the gallery (3 images).
The Netherlands
Grant Programme
News