Exhibition of the Jewish Museum Berlin in Budapest 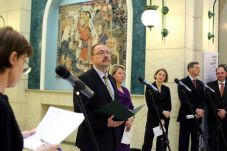 The photo exhibition “‘Russians Jews Germans’ – Photographs by Michael Kerstgens from 1992 to the Present,” with the support of both the German Federal and the Hungarian Foreign Ministries, was opened in the building of the Ministry of Foreign Affairs of Hungary on 5 March 2013.

After the fall of the Iron Curtain in 1989/90, nearly a quarter of a million Jewish immigrants – so-called “quota refugees” – came to Germany from the former Soviet Union. This wave of immigration brought lasting changes in the German Jewish community. Michael Kertgens has documented this over a long period and his photos can be regarded as an initial visual reflection on a process which has not yet reached its conclusion and whose outcome is accordingly still unknown.

The exposition will be opened to the public when it is transferred to the History Museum of Budapest, between 2 May and 23 June 2013.

Image gallery: Exhibition of the Jewish Museum Berlin in Budapest

Click on one of the images to view the gallery (3 images).
Hungary
IHRA News