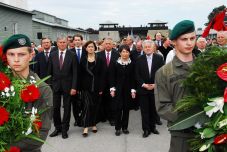 On 8 May, more than 7,000 visitors attended a commemoration ceremony for the 66th anniversary of the liberation of Mauthausen Concentration Camp near Linz, in Oberösterreich (Upper Austria).

The commemoration ceremony included church services, a wreath-laying ceremony, the unveiling of a memorial plaque, and a march of the living camp inmates.

The event focused on the theme "Network of Terror."  Willi Mernyi, Chairman of the Austrian Mauthausen Committee, emphasized that the network established by the Nazi regime was able to function only due to the existence of an informal network of sympathizers.  He stated that addressing this aspect automatically results in raising the question of moral courage and of engagement against extremism.