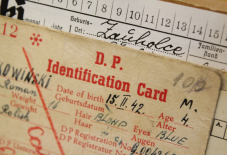 Bad Arolsen, 7 August 2017. The 2017 Yearbook of the International Tracing Service (ITS) has been published, focusing on the fates of children and adolescent survivors of Nazi persecution. “They were the most vulnerable, and had lost every sense of what it means to have a home,” says Henning Borggräfe, head of the ITS department of research and education. “By featuring the situation of child survivors in the ITS Yearbook we would like to call the attention of scholars and educators to this subject.”

Nina Ritz, director of the Max Mannheimer Study Center and co-editor of the book: “The historical-political education work on National Socialism shouldn’t end with the liberation of the concentration camps. Young people are very interested in what happened after the war.”

In the period following the end of the Nazi regime, child and adolescent survivors bearing Displaced Person (DP) status started by searching for surviving family members. They needed a prospect for their future, and in many cases they needed new homes. There were underage survivors of the Holocaust and the genocide of the Sinti and Roma, and approximately 1.5 million of the former forced laborers were unaccompanied minors. Added to these numbers were the child deportees of the “Lebensborn” program who had been robbed of their identities in the process of their Germanization.

The latest edition of the Yearbook offers insights into the aftermath of the Holocaust, Nazi persecution and forced labor, and takes a look at the work carried out by Allied relief organizations after 1945. The authors also give an introduction to various methods of historical-political education work on DPs.

“In view of the current migratory movements and the large number of unaccompanied underage refugees, the issue of the social and political challenges faced at the end of World War II has also taken on new significance for the present,” comments Henning Borggräfe. “It’s a topic that has a lot of potential for explaining the individuality of different life paths – and survival paths – to young people, based on specific biographical examples,” Nina Ritz adds.

The contributions to the Yearbook document an international scholarly conference carried out at the Max Mannheimer Study Center in Dachau from 30 May to 1 June 2016. The yearbook was published in English by Wallstein Verlag in Göttingen. The ITS launched the yearbook series in 2012 with the aim of shedding light on the potential its archival holdings offer education and scholarly research.

Freilegungen: Rebuilding Lives – Child Survivors and DP Children in the Aftermath of the Holocaust and Forced Labor; vol. 6

Also available as an e-book

The International Tracing Service (ITS) is an archive and a center for documenting National Socialist persecution and the liberated survivors. Out of the more than 30 million documents, former victims of Nazism and their families receive information regarding their incarceration, forced labor, and postwar allied assistance. The documents in the ITS archives provide the basis for research and education. As of 2013 the original documents in the ITS archives are included on the UNESCO "Memory of the World" Registry. The ITS is governed by representatives from 11 member states. The German Federal Government Commissioner for Culture and the Media funds the ITS. The ITS is one of the International Holocaust Remembrance Alliance's seven permanent international partner organizations.