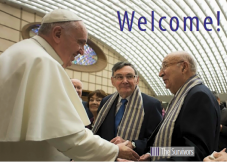 Within the framework of the Catholic Church's World Youth Day, up to 30,000 young people per day will visit the Auschwitz-Birkenau Memorial and Museum between 20-28 July.

In a Press Release from the International Auschwitz Committee, the organization reported that Holocaust survivors were touched by the high level of interest young people were showing to visit the former concentration and extermination camp. In a letter to the young participants, the survivors wrote " We are grateful that so many of you want to visit the Auschwitz-Birkenau Memorial during your stay. You will be seeing one of the saddest places on earth: the place which has become an almost incomparable symbol for the murder of European Jewish families, of Sinti and Roma, of Polish people, of prisoners of war from the Soviet Union and countless political prisoners from many countries in Europe. A crime scene, a cemetery, a memorial."

The letter urged the young people, "to preserve our memories, that it will become clear to you, especially here in Auschwitz, just how threatened and fragile the world is....Love and protect your world, take care of your families and your fellow human beings! Express your outrage at injustice and at the complacency of those who allow injustice to happen. The world has been placed in your hands, and so too have our memories. Protect tolerance and democracy, and enjoy life. This is the essence of our experiences, and we want to give this to you – during your visit to Auschwitz, and on your future paths throughout life."

On 29 July Pope Francis will visit the Auschwitz-Birkenau Mememorial and Museum together with Holocaust survivors.

The International Auschwitz Committee was founded by survivors of the Auschwitz concentration camp.