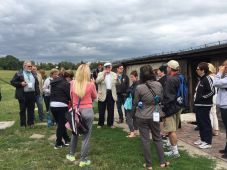 From 6 – 17 July 2016 the Neuberger Holocaust Education Centre conducted a Holocaust education tour for twenty-two Canadian educators, which included programs in Austria and Poland.

Led by the Dr. Carson Phillips, Managing Director at the Neuberger and Michelle Fishman, the Centre’s Education Coordinator, the group toured sites of Jewish heritage, culture, and remembrance as well as sites of destruction associated with the Holocaust.

The program began in Austria, where participants visited the Tunnel of Rembrance in Styer and learnt about the arms industry, forced labour and systematic destruction of human lives, and how the town has comes to terms with its National Socialist past. Other significant historic site visits included Schloss Hartheim, which was notorious for being one of the Nazi “euthanasia” killing centers, and the Mauthausen concentration camp. In partnership with the Austrian Federal Ministry for Education, the Arts and Culture, participants engaged in dialogue with pedagogical experts on issues related to teaching the Holocaust. It provided an important opportunity for participants to discuss current challenges and opportunities in Holocaust education and to learn how the Holocaust is taught in Austrian classrooms. Study tour participants met with Martina Maschke, Dr. Heidemarie Uhl, and Dr. Gerhard Baumgartner, all members of the Austrian delegation to the International Holocaust Remembrance Alliance.

The opportunity to hear the personal life stories of Holocaust survivors was another highlight for the Canadian teachers. Mr, Ari Rath discussed his pre-war life in Vienna and how he successfully escaped to British Mandate Palestine, and Mr. Herbert (Blackie) Schwarz recounted his childhood in Vienna and subsequent deportation to the Riga ghetto. Educational sessions with Prof. Anton Pelinka contextualized Austria’s historical connection to the Holocaust and the Second World War.

While in Poland, participants visited Auschwitz-Birkenau, and Krakow where they met with IHRA expert Dr. Piotr Trojanski of the Pedagogical University. A key component of each segment of the study tour is to meet classroom educators and pedagogical experts so that learning occurs in a layered approach. Participants engaged in discussions with academics and educators about current methodologies for teaching the Holocaust. Mr. Pinchas Gutter, a survivor of the Warsaw ghetto and the Majdanek concentration camp shared his personal experiences at both locations, providing the teachers with important insight into how the Holocaust affected humanity.

Study Tour participants represented all segments of Canada’s education system including Middle and High School teachers in both the public and Roman Catholic school systems, as well as school board officials. Geographically, the program included teachers from British Columbia, Saskatchewan, Manitoba, and Ontario. This important educational program was supported with funding from The Conference on Jewish Material Claims Against Germany, the Government of Canada, and private donors.