Auschwitz Institute for Peace and Reconciliation in Bucharest 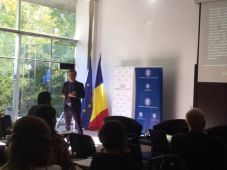 The seminar is a continuation of the programs that the Romanian Chairmanship of the International Holocaust Remembrance Alliance organized in 2016 on the combatting antisemitism for public servants (police officers) and magistrates. It is envisaged as a program to provide governmental participants with the capacity and the tools to act in situations that may constitute a threat to life. The program is part of Romania's recent effort to combat antisemitism, xenophobia and discrimination and the event benefited from the contribution of longstanding members of the Romanian delegation to the IHRA, such as Adrian Cioflanca who attended as speaker and presented the investigation in the Popricani mass grave. On-site visits were organized to the Memorial of the Holocaust Victims in Bucharest and at the location of the future Museum of Jewish History and of the Holocaust in Romania.