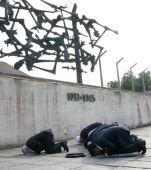 Last week, eight Muslim leaders from communities across the United States took part in a trip to Dachau and Auschwitz as part of an initiative to foster interfaith understanding and awareness on the Holocaust, the Jewish Daily Forward reports. After the tour they issued a joint statement denouncing antisemitism, Holocaust denial and religious bigotry.

Accompanying the group were several officials of the U.S. government, including Hannah Rosenthal, the Department of State's Special Envoy to Monitor and Combat Antisemitism, and Rashad Hussain, Special Envoy to the Organization of the Islamic Conference.

"There is a view that there is growing antisemitism in the Muslim world, reinforced by people like President Ahmadinejad, that there is growing Holocaust denial in the Muslim world," explained one of the trip's organizers. "In light of that, the idea was to offer education to those who might not have the kind of knowledge that we've had about World War II and the Jewish community, and to do this in a public way."

Muzammil Siddiqi, imam of the Islamic Society of Orange County, California, said in Krakow, "We came here to witness the place where the most horrible crimes were committed. We came here to understand the pain of the Jewish community. This is in order to improve relationships, because you cannot build relationships with people unless you know what they've been through."

Yasir Qadhi of New Haven, Connecticut, a former Holocaust denier, told the press that he was happy to join the trip because, in his words, "I wanted to see for myself how wrong I was." Qadhi reinforced his claim that ignorance is the root of denial by saying, "Anybody who is a Holocaust denier should deserve a free ticket to see Auschwitz and Birkenau, because seeing is just not the same as reading about it."

“We bear witness to the absolute horror and tragedy of the Holocaust, where over 12 million human souls perished, including 6 million Jews,” the group said in their joint statement after the trip. “We condemn any attempts to deny this historical reality and declare such denials or any justification of this tragedy as against the Islamic code of ethics.” The Muslim leaders said they "witnessed firsthand the historical injustice of the Holocaust" and cited the Quran: "In Islam, the destruction of one innocent life is like the destruction of the whole of humanity and the saving of one life is like the saving of the whole of humanity."

The trip was made possible through funds from the Konrad Adenauer Foundation in Germany, in cooperation with the Center for Interreligious Understanding in New Jersey.