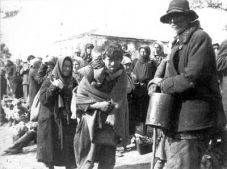 Last month an agreement was signed between the Yad Vashem Holocaust Memorial Authority and the archives of the Ukrainian KGB.

The previously unannounced agreement will give Yad Vashem access to a wide range of historical documents and will vastly expand historical research into the fate of hundreds of thousands of Jews who perished during the Holocaust in the Soviet Union.  Over the next few months, researchers will travel to Kiev to photocopy the documents and bring these materials back to Jerusalem for cataloging and processing.

The documents contained in the Ukrainian KGB archives include lists of deported and murdered Jews, recorded minutes from Ukrainian security forces meetings following the liberation of concentration camps, and information on post-war trials.  The records will primarily be used to identify the names of as many victims as possible so they can be added to Yad Vashem's Database of Shoah Victims' Names.  The database still lacks the names of approximately two million victims, the majority from Eastern Europe.