70th Anniversary of the Breakout of Jasenovac Inmates 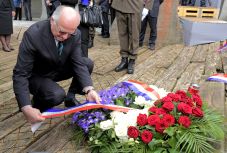 On 26 April 2015 a commemoration event was held at the Jasenovac memorial to mark the 70th  anniversary of the breakout of Jasenovac inmates, which occured on 22 April 1945.

High officials, Prime Minister Zoran Milanović,  ministers Vesna Pusić, Orsat Miljenić, Berislav Šipuš  and Tihomir Jakovina, Croatian Parliament Speaker Josip Leko, President of the Serb National Council Milorad Pupovac, and many others, attended the commemoration. The commemoration was opened by Nataša Mataušić, president of the Memorial's Management Board. Zoran Milanović, Josip Leko and Milorad Pupovac, also adressed the participants, as well as Branko Lustig, who spoke in the name of the President of the Republic Kolinda Grabar-Kitarović. At the end of the ceremony representatives of the religious communities said prayers and wreaths were laid at the bottom of the Flower Monument.

Bruno Boyer, from Memorial de la Shoah, and  Steven Luckard from United States Holocaust Memorial Museum, who also attended the commemoration, then visited the Office of the President of the Republic K. Grabar-Kitarović, where they were introduced by the President's new special adviser for Holocaust issues, Nataša Jovičić.

Image gallery: 70th Anniversary of the Breakout of Jasenovac Inmates

Click on one of the images to view the gallery (4 images).
Croatia
Committees