From 25 – 27 May, 2017, an International Holocaust Remembrance Alliance Expert Meeting entitled “50 Years of Roma Genocide Research” was organized by the Documentation Archive of the Austrian Resistance in Vienna /Austria and its director, Dr. Gerhard Baumgartner.

The Vienna expert meeting contributed to providing an overview of current and emerging research in the field as well as identifying areas and topics where future research is needed. 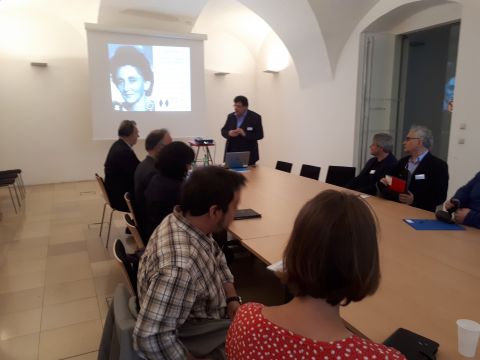 In his opening address Ambassador Michael Baier, who was representing the IHRA Chair, noted that over the last decades a more complete understanding of the persecution and genocide of European Sinti and Roma under Nazi rule had emerged, but stressed that many central questions concerning motivation, perpetrators, targeted populations as well as persecution policy and persecution measures remained unanswered. With the increasing availability of new research from the countries of Central and Eastern Europe a more detailed picture is emerging, enriched by many testimonies of survivors, but knowledge about the persecution of Roma and Sinti in many areas of Europe still remains incomplete. Against the backdrop of an emerging awareness among European Roma, who see the Roma Genocide as one of the cornerstones of a common European Roma identity, the need for academic research on central questions of this chapter of European history is of great importance, said Ambassador Baier. He also referred to the IHRA Committee on Roma Genocide of the Roma which, since its foundation aims to coordinate – in cooperation with national agencies - European efforts on commemoration and education as well as to support existing and future memorial sites and commemorative events in IHRA Member Countries all over Europe.