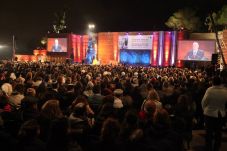 Holocaust Martyrs' and Heroes' Remembrance Day (Yom Hashoah in Hebrew) is a national day of commemoration in Israel, on which the six million Jews murdered in the Holocaust are memorialized.

The remembrance day begins at sunset and ends the following evening. The central ceremonies are held at Yad Vashem and are broadcast on television. The ceremony was opened in the presence of the President, the Prime Minister, the Speaker of the Knesset, and the President of the Supreme Court. Dignitaries, survivors, the children of survivors and their families as well as the general public were also in attendance.

The central theme of the remembrance day at Yad Vashem 2015 was 'The Anguish of Liberation and the Return to Life: Seventy Years Since the End of WWII'. Professor Dina Porat shares some thoughts on the topic in the following essay. Each year six torches are lit in memory of the six million Jews who were murdered during the Holocaust. You can find out more about the survivors who lit the torches this year here.

On Thursday 16 April at 10.30 the “Unto Every Person There is a Name” recitation of Holocaust victims’ names by members of the public will take place in the Hall of Remembrance.More photos of the event can be viewed on the Yad Vashem website and the full press release can be viewed here.

Tens of thousands of Israeli youth will be participating in the "March of the Living" from Auschwitz to Birkenau today. In addition, events organized in people's homes called Zikaron b'Salon ("Memory in the living room") have become increasingly popular across Israel, wherein a survivor speaks in an intimate framework, sharing their personal story with the assembled guests.

The closing ceremony will be held at the Ghetto Fighter's House on the evening of 16 April.