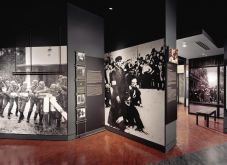 On Thursday 29 September the Montreal Holocaust Memorial Centre will launch access to the Visual History Archive.

This unique resource that allows for the discovery of 1,200 Holocaust survivor testimonies from Canada, and the research of over 53,000 other personal stories in the Visual History Archive.

The project is carried out in partnership with the USC Shoah Foundation,  Sarah and Chaim Neuberger Holocaust Education Centre & the Jewish Public Library.

The Visual History Archive® is USC Shoah Foundation’s online portal that allows users to search through and view more than 53,000 video testimonies of survivors and witnesses of genocide. Initially a repository of Holocaust testimony, the Archive expanded in April of 2013 to include 64 testimonies from the 1994 Genocide Against the Tutsi in Rwanda and again in April 2014 to include 12 testimonies from the 1937 Nanjing Massacre in China. All told, the testimonies have been conducted in 63 countries and 41 languages.

The Montreal Holocaust Memorial Centre educates people of all ages and backgrounds about the Holocaust, while sensitizing the public to the universal perils of antisemitism, racism, hate and indifference. Through its Museum,  its commemorative programs and educational initiatives, the Centre promotes respect for diversity and the sanctity of human life.
Canada
IHRA News