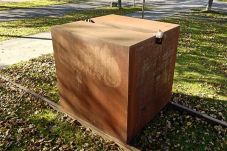 "It is a little known fact that in Switzerland more than 50 mainly smaller monuments recall the Shoah. While large memorials deal with the history of the Second World War and the Shoah in neighboring countries, Switzerland hosts mostly discreet signs of memory, telling small stories."

From 27 - 30 November, 2017, the biannual IHRA Plenary Meeting held in Switzerland convened delegations from 31 Member Countries and provided a unique opportunity to learn about and discuss projects and challenges within the field of Holocaust education, remembrance, and research.

At the recent IHRA meeting in Bern, Barbara Haene, phd candidate at Center for Jewish studies at the University of Basel, presented the early research done on Shoah memorials in Switzerland by her colleague Fabienne Meyer. Meyer's study documents these smaller memorials, both through description and photographs, in her study 'Monumentales Gedächtnis? - Shoah-Denkmale in der Schweiz'. For the first time, this research sheds light on an often overlooked expression of memorial culture.

Based on Meyer's survey, Haene led a discussion with the members of IHRA's Memorials and Museums Working Group on the opportunities and challenges of smaller Holocaust memorials. The survey noted that "these Shoah memorials are usually located in inconspicuous locations and they are little noticed beyond their communal level. There design stretches from classic memorial plaques to works of arts to street names or names of squares and parks. We find them in Jewish cemeteries or at synagogues, at border crossings, in communities where helpers have lived or worked, or in places where refugees have found shelter."

While Meyer raises the question in her study as to why Switzerland does not have a larger, central Shoah memorial, she also sees the distinctive local character of memorials as an opportunity. Haene agrees: "Most of these smaller memorials are deeply embedded within local history, documenting, for example, places where individual refugees were rejected, or where refugee helpers lived and worked. They offer an opportunity for the local community to start a conversation and reflect on their own regional involvement."

The discussions within IHRA's Memorials and Museums Working Group focused especially on what recommendations can be made when memorials are overlooked or ignored by local communities, as Meyer's study illuminates through examples. IHRA experts discussed the need for engagement to make memorials speak to larger audiences, with the help of contextualization or of educational programs. In that sense, the first study on smaller Swiss memorials clearly reverberated in many IHRA Member Countries. Its systematic country-wide documentation modeled an approach to study an overlooked practice of Holocaust remembrance that might be interesting for other countries to consider.

Photo: "Once erected and firmly installed, a monument disappears very quickly into oblivion and with it the effect attached to it. This is also the case with the sculpture "Shoah" of Schang Hutter which once provoked a lot of discussions in all directions, when it was moving around in Switzerland. Today it stands unnoticed in front of a school in Solothurn, a small city in Switzerland."