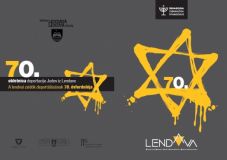 The end of April 2014 marked the 70th anniversary of the largest deportations of Jews from Slovenian territory.

The largest pre-war Jewish community in Slovenia lived in the Prekmurje region in the north-east of the country. In 1941, the region became part of the Hungarian occupation zone. After the Nazi occupation of Hungary in the spring of 1944, the Jewish population in Prekmurje was the first to fall victim to mass deportations, with most being sent to Auschwitz–Birkenau. Deportations began on 26 April 1944; the vast majority of deportees never returned.

A number of events were organized in Slovenia to commemorate this tragic and painful event.

In Prekmurje, the Municipality of Murska Sobota erected a plaque on 25 April to commemorate the lost Jewish community on the site where the Murska Sobota synagogue formerly stood.

Also in Prekmurje, the Municipality of Lendava held a commemorative event at the Jewish cemetery in Dolga vas and unveiled a plaque on the Lendava synagogue on 25 April, where a collection of books on the Holocaust was exhibited and screening of films on the Holocaust took place throughout the day.

In Maribor, a literary evening was held on 24 April by the Center of Jewish Cultural Heritage Synagogue Maribor. Joseph Roth's novel Job: The Story of a Simple Man, which was recently published in Slovenian, was presented and discussed.

In Ljubljana, the Mini Teater theatre and the Jewish Cultural Center held an evening event on 24 April, which featured the screening of a documentary called Jews in Slovenia, a discussion with its director, Maja Weiss, and a literary event with Dušan Šarotar, who presented his novel Billiards at the Hotel Dobray.

Also in Ljubljana, Savyon Liebrecht's The Strawberry Girl premiered on 25 April at the Mini Teater.